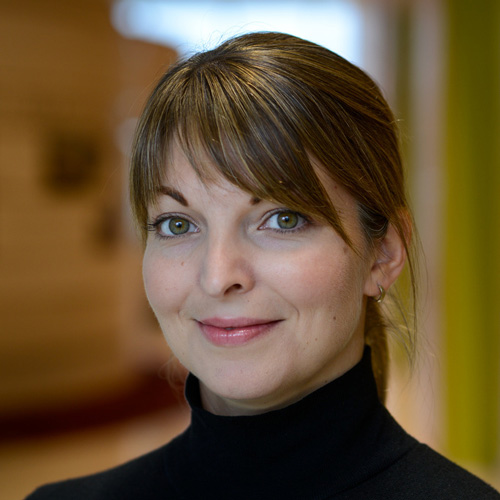 Caroline Laplante, PhD: Laplante trained as a biochemist and obtained her Ph.D. in biology from McGill University. During her doctoral studies, she discovered an essential role for the differential expression of the cellular adhesion protein Echinoid in the polarized assembly of the contractile leading edge in the migrating dorsal epithelium during embryogenesis in Drosophila. Her postdoctoral work challenged commonly accepted notions about the cytokinetic contractile ring essential for cell division in animals, fungi and amoebas. She discovered that not one, but multiple myosins function to generate the forces necessary for cell division and characterized the distinct role of these three myosins during the assembly and constriction of the contractile ring in fission yeast. Laplante adapted high-speed Fluorescence PhotoActivated Light Microscopy (FPALM) to the study of live fission yeast cells. With this technique, she obtained quantitative images of the cytokinetic apparatus at unprecedented resolution. She discovered that cytokinetic protein assemblies called “nodes” are the basic unit of constriction of the contractile ring in fission yeast, and built a molecular model of the protein organization within the node. Sophia Webster, PhD: Sophia graduated with her Ph.D in Entomology with a minor in Genetic Engineering &amp; Society in May 2019. She is now a postdoctoral researcher in the Physics department working with Drosophila melanogaster embryos to further understand the origins and roles of tissue biomechanical properties in the developing embryo. Sophia is using confocal microscopy, laser ablation, and hsFPALM to understand how the cytoskeletal architecture affects the mechanical properties of cells and what the differences are in cytoskeletal structures of cells on the dorsal, lateral, and ventral borders of the developing embryo. Sophia is co-advised by Dr. Julio Belmonte, Dr. Mary Elting, Dr. Caroline Laplante, and Dr. Gregory Reeves. Outside of the lab, Sophia enjoys working out, spending time outside, cooking, and DIY home improvement projects. Mohamed Moshtohry: I got my bachelor’s degree in Egypt at UST-ZC, in theoretical particle physics. My interest in biophysics sparked in my senior undergraduate year at Aboul-ela’s lab, the Center of X-ray Determination of the Structure of Matter. We worked on modeling the folding mechanism of the SAM-I riboswitch, using X-ray crystallography along with stochastic simulations. So, I switched to biophysics in my PhD. believing that with the right mindset, you can answer the hardest questions, you just got to learn how to think, which I hope I learned in my undergraduate physics studies. In my graduate career, I joined Caroline Laplante and Mary Elting’s lab, where we are working on combining the results of laser ablation experiments along with computational and molecular models to generate a mathematical model of the contractile forces of the acto-myosin ring formed during cell division of eukaryotic cells. Hobbies include, but are not limited to: writing screenplays, wildlife photography, sharp cooking skills, making music, football (soccer), making lists and a little bit of cinematography. Kimberly Bellingham-Johnstun (Research Associate): Kim got her BS in microbiology at Oregon State University before moving to Raleigh, NC and getting her MS in microbiology here at NCSU. In our lab, Kim uses hsFPALM and confocal microscopy to study the molecular architecture of cytokinetic structures, like the actomyosin contractile ring. When not in the lab, she enjoys cooking and going on the occasional run. Annelise Thorn (Biological Sciences BA, Class of 2020): Annelise is currently getting her BA in Biological Sciences, with a minor in Genetics, from NCSU. Annelise helps not only with general lab maintenance, but also data analysis on the PAA microtubule project.

John Ravi (Undergraduate Electrical and Computer Engineering student): May 2017-May 2018